We had a mostly pleasant sail out of Pohnpei. SV Dione was always within 35-50 miles of us. LIke most of our passages we monitor the weather pattern and try to choose the optimal days. The first few days were great sailing and a couple of doldrum days motoring. This 900 mile passage was the longest distance since our Mexico puddle jump crossing.
We had been watching a shear line of warm and cold air colliding, technical weather term is occluded front that formed off the Philippine coast and traveled north beyond Guam, Saipan and the Northern Marianas but thought it would weaken by the time we arrived in the vicinityThe forecast was for 25 kt winds just as we would arrive in Guam and the direction would be just aft of our beam. Sounded okay, we have storm sails.
About one day out from the SE coast of Guam the wind and waves built rapidly. Our friend Lou in Portland was texting us weather reports from NOAA and it appeared to be ominous.

We considered heaving to 150 miles out but it was already too late, the wind speed was much higher. It wasn’t the wind that caught us off guard. The lightening was directly overhead and bolts were traveling downward into the sea. We put most of our spare navigation gear and laptops in the oven, a quick faraday emergency protection. The waves become so tall and were breaking at the boat. At times we dropped into the valley of rolling breakers and the horizon disappeared. We quickly dropped the reefed sails and hoisted the storm trysail and continued sailing. Fortunately the sane captains and boats stayed in port so we weren’t worried about colliding courses, and we monitored the chartplotter with AIS from below. The most we could do was poke our heads out every 15 minutes. Fortunately Capt Janeway, our monitor windwave maintained course with the heavy air wind paddle for us. Down below the movement and shrieking rigging was tolerable.
47 miles off the SE coastline of Guam we heard Dione hail the US Coast Guard reporting their concern that they had lost radio contact with us for over 24 hours. Oh no, the last thing we wanted was the CG contacting our “emergency contacts” at home. We quickly responded to the CG with our position and condition, “all is well”.
We rounded the south end of Guam at 11:00 p.m., the wind dropped to 20 knots, the seas became moderate 8′ waves. For the first time in over 20 hours John was able to get some sleep on the cabin floor. The port control asked us to stand off til daylight to enter. Technically we could’ve responded with hazardous conditions to our boat and well being and been allowed in but no problem, we found shelter just behind the south headland about a mile from the entrance and heaved to with the engine running at the lowest speed possible to maintain forward motion from the beach. It was calm and peaceful, we each caught an hour of sleep.
At daybreak we had permission to enter the harbor ahead of the inbound US Navy frigate that was 3 miles away. An overly exciting passage ended with overload of stress, hand steering over 16′ waves 10 seconds apart, a near knockdown by a 20 wave on the beam and 28 knots of wind on the nose with the frigate bearing down on us. John nearly turned back out to sea but one last hard roar of our awesome 50hp Perkins and a hard pull to starboard on the rudder gave us the momentum to round up and over the last bitchin wave from Neptune’s armpit. Goodbye easy, NE trade wind sailing, Aargh to the wild Pacific ocean north of the equator! It was surreal, thats all we can say. We made our way into the Mariana Yacht club anchorage and tied to a new mooring ball. It was 10:00 a.m., breakfast had NEVER tasted so delicious!

We spent two weeks in Guam, shared a rental car with Glenn and Sue, SV Dione and had a blast driving the entire island a couple of times. For the most part, Guam isn’t exactly geographicaly stunning like other Pacific islands. The rich hisotry makes up for it though.

Sir Captain Magellan arrived in the late 1500’s and slaughted most of the men in order to populate Guam with Spanish culture and citizens. Very gallant man.

John drove the 10 days, a treat for him to drive the six lane highway that was congested at rush hour just like Portland. We spent oodles of money provisioning, bought our folding bikes for our Japan adventure, and crammed more stuff into the boat than it can really carry. We never stopped from 7:00 a.m. to dark. The dinghy ride was nearly 1/4 mike each way to shore and the wind never died down below 10 kts, a very wet ride. We got to the point of riding back to the boat in our underwear a couple of times. The real standup hot shower was by far, the best aspect. I certainly didn’t feel guilty for standing under the spray with blasting hot water running over my head.
We ate WInchell donuts, McDonalds, Applebee giant burgers, an authentic German meal with large mugs of draft German beer, packaged pork rinds, and ate junk food to our hearts content. We still didn’t gain any weight back from our passage.
Our new Dickenson grill arrived at the post office, we admit we splurged and had it shipped from state side but it is worth every cent. We had grilled steaks and mashed potatoes with Glenn and Sue, it was our first steak since we left Portland.

Its a hotspot for Japanese and Korean tourists. SIgns, posters, and menus are written in 3 languages. Bus loads of tourists roll into every coastline attraction. The giant shopping mall with Louis Vitton, Gucci, Coach, and low end Macy department store (my stopping place) was packed with Japanese people. We provisioned heavily at Walmart where many Japanese tourists were buying up peanut butter, nuts, and other oddball items that are expensive in Japan. My cue on what to purchase before departing Guam.

Our two weeks zoomed by, we absolutely loved Guam. We were fortunate the rainy season wasn’t upon us, it begins in late April. 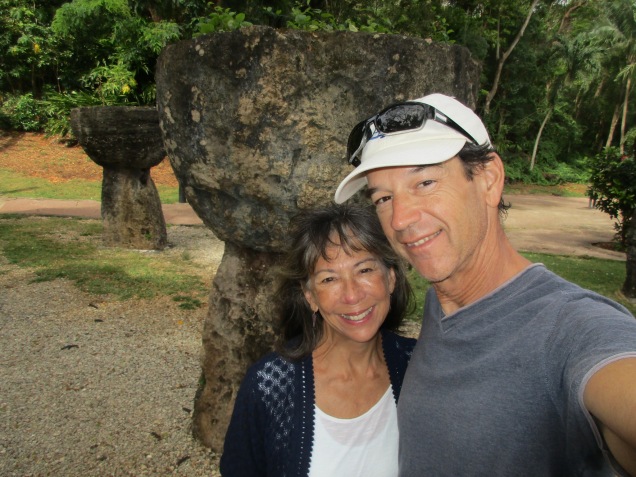 We had beautiful weather, great food, and fun friends to hang out with. The only drawback was the spotty 4G wifi that was great when it worked. Most of the time at the boat we were without wifi. Diesel was $4.11/gallon, we used about 15 gallons on our passage from Pohnpei, especially during the harbor entrance running at 2300 rpm. Oh well.

Off to Saipan, our next blog.

2 thoughts on “Guam With A Six Lane Highway”

Join us on our ocean voyages, sailing on Konami - Small Wave, our Westsail 32

Join us as Anjuli takes to the sea for new adventures