We are close to departing Pago Pago, Am Samoa; bound for Apia, Samoa. We’ve been here 2 months, a little longer than anticipated but so much of our plans changed in the short term. Some due to maintenance and waiting for parts, and then the timing of our son’s wedding happened to coincide with our plans. It all worked out for the best, we were ecstatic to see at least two family members and share their joyous day.

Our  1 week vacation in Maui was very relaxing!

Just a few highlights of our adventures here in Pago Pago.

This is the fish sensor that was floating on the surface as we sailed from Bora Bora to Suwarrow back in July. The 8×8 foot square 2″ tubular frame has a sensor (the sensor is to my right) that sends a gps signal to the fishing fleet via a solar powered float. 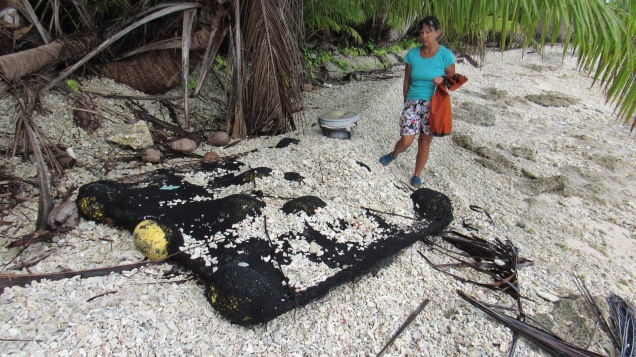 The sensor indicates the shadows or presence of fish huddling under the netting, an indication that large schools of fish are nearby. It took off a 3″ stripe of our bottom paint and stole our lucky fish line and squiggly squid hook. There are hundreds of hazardous counters floating on the ocean surface, mostly deployed by the Asian fishing fleets. This one washed up on the beach in Suwarrow. The solar panel was still intact.  As a result of losing our lucky line our catches dwindled in size and flavor. 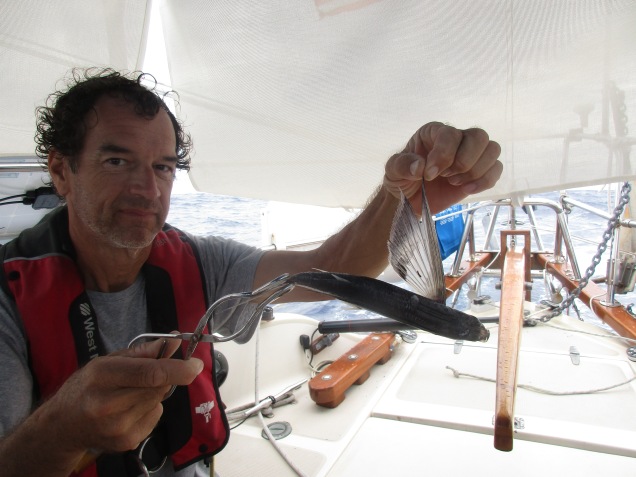 The always-so positive fisherman wouldn’t give up even the largest flying fish we’ve had, and I vehemently declined his smelly offer of dinner.   It became one of our shopping expeditions to find more hand line and fishing gear when we arrived in Pago Pago. No easy feat here amongst the giant tuna fleet that has scooped up all the “big fish”  gear leaving only 8 pound line and small hooks on the shelves. Fortunately we were able to buy more fishing gear while in Hawaii.

Speaking of dwindling fish, here is the ruin of our ocean. 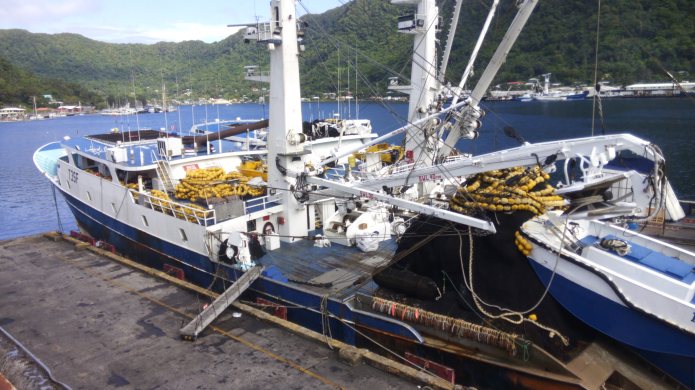 All the large fishing fleets use these one mile nets with “cork”(hard foam) floats to haul in all the fish, squid, anything that can be trapped. Starkist and Samoa Tuna packing companies are the largest employers on the island. Often times the nets break and drift away trapping and killing whales and dolphins, and ensnaring sailboats.

There is now a shortage of wahoo, restaurants serving fish here have signs posted  “wahoo shortage”.  One day soon, expect to see a sign posted  “Ciguatera fish only, take your chances.”

We woke up one morning to see a “bomb” floating towards us. John got into the dinghy to investigate, lassoed and drug it to shore.

Turned out to be a tuna boat fender, heavy rubber with giant rusty swivels about 2 feet in diameter, 5 feet long. Another hazard out on the ocean.

We hiked along the Southwestern ridge of the harbor about 2000′ in elevation.  The old tram is still up there. The massive steel structure slowly rusts away.

It was decommissioned after the 1980 Flag Day accident. The P-3 military airplane came in too low and caught the tram cable. The cable cars still remain on both sides of the harbor.

This is the remains of the other side of the harbor tram and the view that people waited in line for. Beautiful scenery looking across the caldera from higher tram, the picture doesn’t do it justice.

The entertainment of the island, “The Bus”!  The buses are privately owned. For a buck you can ride anywhere but if you get off for one errand and get back on to travel to another destination looking for parts or groceries (no Fred Meyer One Stop Shopping here) you pay another buck. Add all up those “ons and offs” for 2 people, it’s not that cheap anymore. But the buses have their own personalities fashioned after the owners and they are very intriguing. The sound system deafens you, the blown speakers vibrate and beat against the wall of the bus. The small 30″ wide seats shared with large Samoans will cramp you and half of your butt will hang out into the 2 foot isle only to be pinched by the rider’s leg on the next seat over. We haven’t seen a bus that doesn’t have a picture of Jesus or a poster of religious saying. The exterior paint schemes, music and dash decorations represent the owners. The interiors range in beautifully treated wood, plywood flooring, bench seats, some padded seats, plexiglass windows that hang between 2 rails, the bus driver’s windows are home sliding windows and scabbed into the sides.

The music is a little strange. Western music, 70’s hits including BeeGees, Techno-Pop Reggae blend, Hymns, some Beyoncé, and other music sung in Samoan blasting away as we rumble down the highway,  or sung behind your ear by one of the riders.

Just a few of the buses… 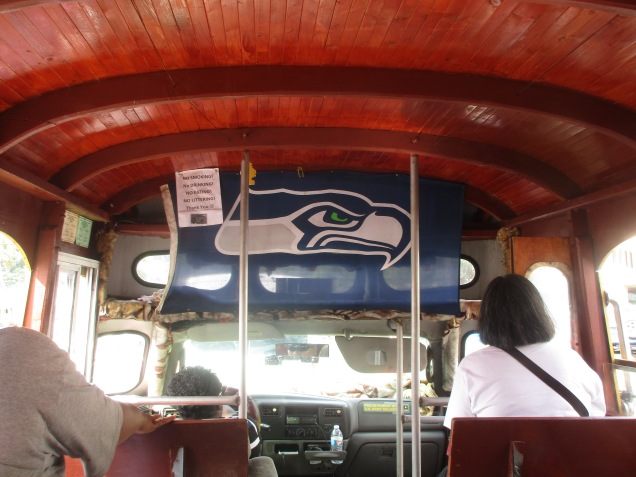 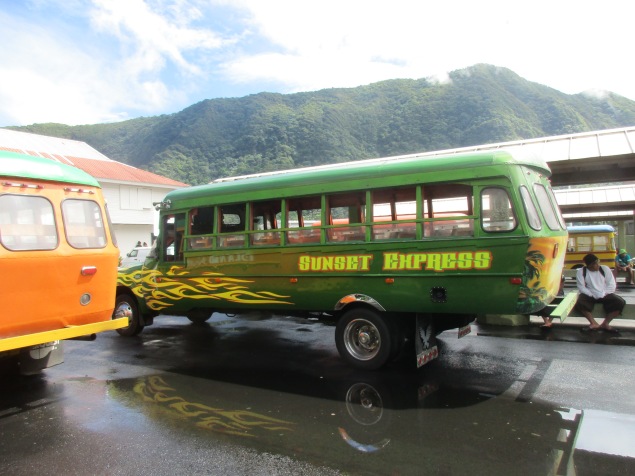 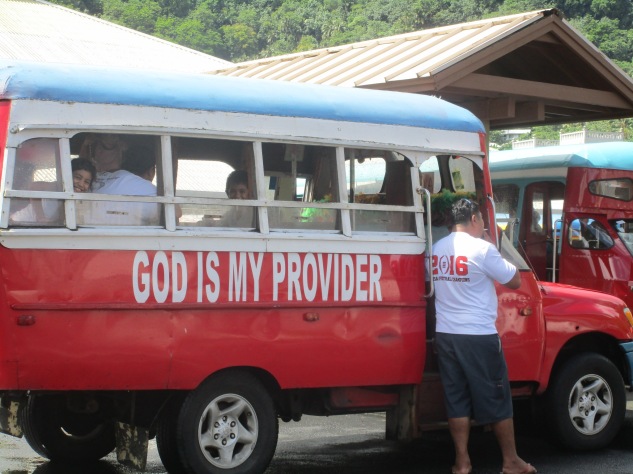 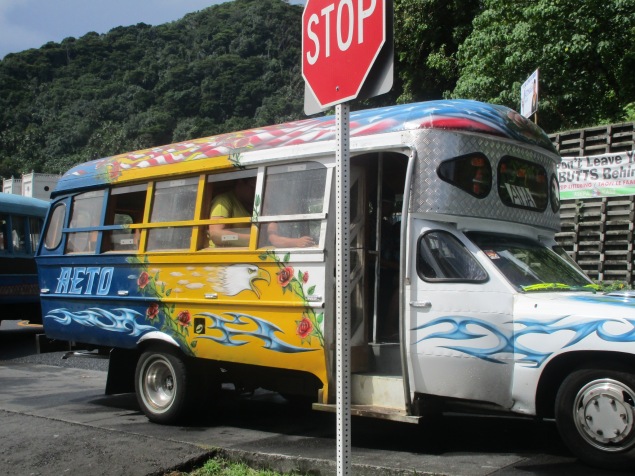 Just some other comical pictures of us hanging out in this place much like home, yet so far from home and family. 1 Pamplemousse for breakfast, lunch and dinner weighed over 4 pounds.

A rainy day poking around the Southwest tram, we waited inside the car until the rain let up.

The fiddlehead fern was over 7′ tall, the stem is a the size of a small tree limb. 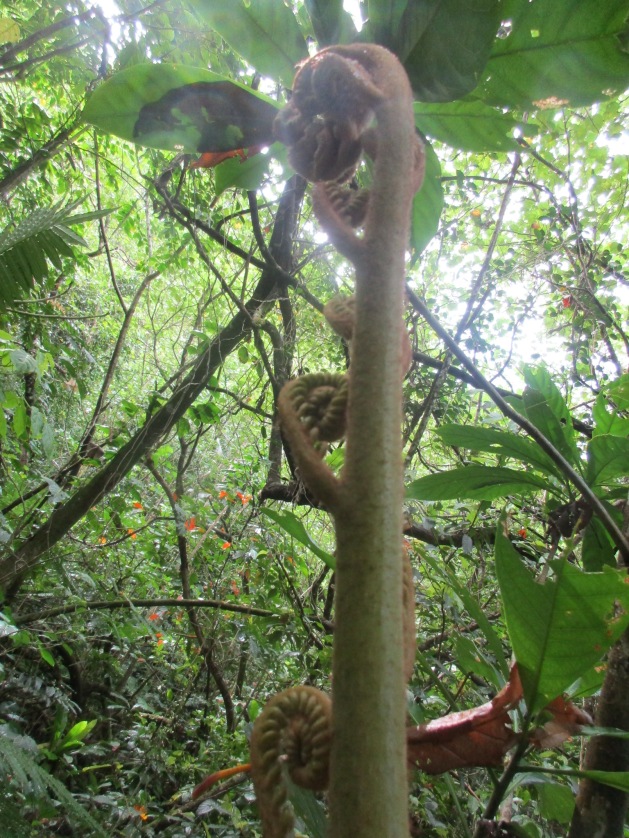 Join us on our ocean voyages, sailing on Konami - Small Wave, our Westsail 32

Join us as Anjuli takes to the sea for new adventures